This idea prevails even today, as members gather to share numismatic information and experience.

Ten individuals wanted to enhance their knowledge of coins, grow their collections and develop some lasting friendships. So they started the NWDCC. The first meeting was held at the Northwest YMCA, Seven Mile & Lasher.  Later the club met at Gloria Dei Lutheran Church on Seven Mile Road.  Then the club moved to Brightmoor Community Center, where meetings were held for many years.  During the ‘90’s, the club moved to its current location, the Livonia Senior Center.

The format of the meetings has remained the same for forty-two years.  There are prizes, numismatic information, food, fun, fellowship and the auction.

In the early days, a door prize was awarded once a month.  It was usually a token or some kind of memento from a national coin convention.  Today the club offers a 50/50 drawing at every meeting along with three door prizes.  These are welcome additions to any coin collection.

Next the meetings offered numismatic information.  There would be a guest speaker, or a film about the United States Mint, a ‘show and tell’ session about a favorite coin or information on how to display coins in a show.  This tradition of sharing information continues through to the meetings today.  Members share news of national coin conventions. Sometimes a member will bring an unusual coin from a far away place along with an unforgettable story.  There could be a prize - winning exhibit of Byzantine Coins, an Opium Dollar or Hobo nickels.  Every meeting offers a chance to learn something new.  One member marveled at the ‘breadth of knowledge and experience’ in the club.‘

Through the years, the auction was an important part of each NWDCC meeting.  It provides a chance for members to build a collection at a reasonable price.  It also offers members an opportunity to sell their coins if they give advance notice.  Even today, the auction is an intense part of every meeting.

The Northwest Detroit Coin Club has always supported a charitable cause. In the early days, proceeds of the annual junk auction were used to send children to summer camp.  Today the revenues of the junk auction are donated to the Livonia Senior Center.

In the past, the annual Coin Show was a big event for the club.  Now the NWDCC holds two Coin Shows every year.  These are well attended and provide lots of fun.

Also, donuts and other tasty treats were served at every meeting,  This fine tradition continues, along with a summer picnic and a Christmas party every year. Because the basis of this club is friendship, members are encouraged to “Bring a friend!”

It is no surprise that the plan which founders of the Northwest Detroit Coin Club implemented is a viable one.  It survived four decades and is still going strong.   “Knowledge Through Collecting” is a wonderful idea.  It will see the club through the twenty first century.

At the next meeting there will be door prizes, delicious treats, numismatic information fun, fellowship and of course the auction.  See you there.  Oh--and bring a friend!

**Special thanks to Ottilie N. and all members who helped with the NWDCC history!

What's On The NWDCC Logo ?

The second is of Alexander the Great, a Greek Coin

The rational for the choices has not been verified.

Based on conversations with long standing members,

it may reflect the joining of American coins and

traditional values in our club today. 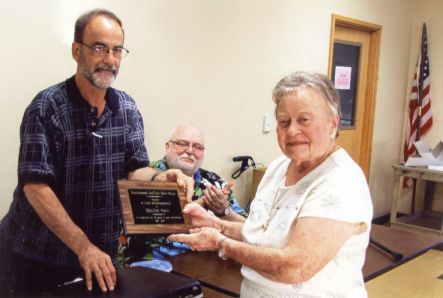 was honored with a Life Membership Plaque by Gary Kelly, President of the Club.

Ten individuals wanted to enhance their knowledge of coins, grow their collections and develop some lasting friendships. So they started the NWDCC.

Lifetime Membership awarded...Don Charters, a contributing vital member of the NorthWest Detroit Coin Club was awarded a LM Plaque by President Gary Kelly, at a recent meeting at the Livonia Senior Center, where meetings on the 2nd and 4th Tuesday of the month are held starting at 7:30 pm. All coin collectors or non collectors are invited to attend.photo credit: David L. Malhalab  M News Service / MNS Photo (313 580 2393)